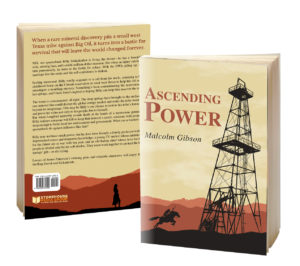 When a rare mineral discovery pits a small west Texas tribe against Big Oil, it turns into a battle for survival that will leave the world changed forever.

NFL star quarterback Billy Strikeleather is living the dream—he has a beautiful wife, adoring fans, and a multi-million-dollar mansion. But when an injury sidelines him permanently, he turns to the bottle for solace. With the DWIs piling up, his marriage hits the rocks and his self-confidence is shaken.

Feeling unmoored, Billy warily responds to a call from his uncle, returning to his childhood home on the Chinati reservation in rural west Texas to help the old man investigate a troubling mystery. Something’s been contaminating the reservation’s hot springs, and Uncle Sam Longbird is hoping Billy can help him uncover the truth.

The water is contaminated, all right. The deep springs have brought to the surface a rare mineral that could disrupt the global energy market and make the tribe wealthy beyond its imaginings. This may be Billy’s one chance to restore his tribe’s fortunes and prove his value not only to his people, but to himself.

But when Longbird narrowly avoids death at the hands of a mysterious gunman, Billy realizes someone will kill to keep that mineral a secret, someone with pockets deep enough to bribe local law enforcement and government. What can a washed-up quarterback do against influence like that?

Billy may not have much power, but he does have friends: a lonely professor with a shipwrecked career and dangerous knowledge, a young TV anchor whose ambitions for the future are at war with her past, and an old Indian chief whose love for his people is rivaled only by his self-doubts. They must work together to protect the hot springs’ gift—or die trying.