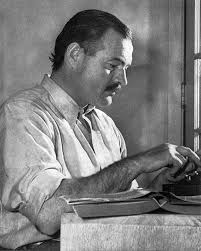 By:  Joe Bunting     The Write Practice

Quotes from A Moveable Feast, Ernest Hemingway’s memoir about his life as a writer in Paris:

Cut Out the Ornamentation

If I started to write elaborately, or like someone introducing or presenting something, I found that I could cut that scrollwork or ornament out and throw it away and start with the first true simple declarative sentence I had written.

Don’t Think About Your Writing When you’re Not Writing

It was in that room too that I learned not to think about anything that I was writing from the time I stopped writing until I started again the next day. That way my subconscious would be working on it and at the same time I would be listening to other people and noticing everything.

Write as Straight as You Can

“Write the best story that you can and write it as straight as you can.”

Write What You Know

Up in that room I decided that I would write one story about each thing that I knew about. I was trying to do this all the time I was writing, and it was good and severe discipline.

Allow Painters to Influence You

I was learning something from the painting of Cézanne that made writing simple true sentences far from enough to make the stories have the dimensions that I was trying to put in them. I was learning very much from him but I was not articulate enough to explain it to anyone. Besides it was a secret.

This book began magnificently, went on very well for a long way with great stretches of great brilliance and then went on endlessly in repetitions that a more conscientious and less lazy writer would have put in the waste basket.

It was necessary to get exercise, to be tired in the body, and it was very good to make love with whom you loved. That was better than anything. But afterwards, when you were empty, it was necessary to read in order not to think or worry about your work until you could do it again.

Never Empty the Well of Your Writing

I had learned already never to empty the well of my writing, but always to stop when there was still something there in the deep part of the well, and let it refill at night from the springs that fed it.

After You Write, Read

When I was writing, it was necessary for me to read after I had written. If you kept thinking about it, you would lose the thing that you were writing before you could go on with it the next day.

When I had to write it, then it would be the only thing to do and there would be no choice. Let the pressure build. In the meantime I would write a long story about whatever I knew best.

What Do You know Best?

It was a very simple story called “Out of Season” and I had omitted the real end of it which was that the old man hanged himself. This was omitted on my new theory that you could omit anything if you knew that you omitted and the omitted part would strengthen the story and make people feel something more than they understood.

Stay Sound in Your Head

All I must do now was stay sound and good in my head until morning when I would start to work again.

If You Can’t Write, Don’t Write

To an aspiring writer: “You shouldn’t write if you can’t write.”

It’s Okay to Be Shy

… [F. Scott Fitzgerald] had the shyness about it that all non-conceited writers have when they have done something very fine.

But Don’t Pimp Your Writing

[F. Scott Fitzgerald] had told me at the Closerie des Lilas how he wrote what he thought were good stories, and which really were good stories for the Post, and then changed them for submission, knowing exactly how he must make the twists that made them into salable magazine stories. I had been shocked at this and I said I thought it was whoring…. I said that I did not believe anyone could write any way except the very best he could write without destroying his talent.

Break Down Your Writing

Since I had started to break down all my writing and get rid of all facility and try to make instead of describe, writing had been wonderful to do. But it was very difficult, and I did not know how I would ever write anything as long as a novel. It often took me a full morning of work to write a paragraph.

I was getting tired of the literary life, if this was the literary life that I was leading, and already I missed not working and I felt the death loneliness that comes at the end of every day that is wasted in your life.

Don’t Drink While You Write

My training was never to drink after dinner nor before I wrote nor while I was writing.

Don’t Judge Your Writing Until the Next Day

After writing a story I was always empty and both sad and happy, as though I had made love, and I was sure this was a very good story although I would not know truly how good until I read it over the next day.