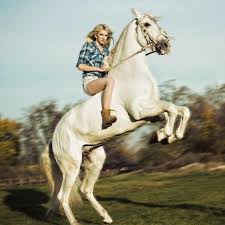 Women with bull horns are in the streets crusading against oppression by men. With a fervor reminiscent of Joan of Arc, all they are missing is her white horse.

Until recently, I doubted the abuse of women to be so pervasive as to warrant wholesale gender rebellion. There is no fundamental flaw in my male character, I fumed, that demands reformation.

But, as more reports surface about women, particularly young girls, who were forced to wage private battles against sexual harassment, another story comes to mind that gives me pause.

The year is 1962. A teenager is shoehorned into the back seat of an old Ford as it labors up a mountain road in backwoods Arkansas. A weekend trip with older boys, their cigarette smoke wafting, makes him feel more grown up than his thirteen years.

But, just as quickly, a whoop erupts from the front seat. The driver U-turns and approaches the girl head-on. Cat calls burst forth as the car breezes by. Her eyes and those of her mount grow round with fear. Tears stream down her face as she kicks her horse into a canter searching for an escape route.

The boy knows what’s happening is wrong, but is too timid to come to her defense. He cannot rationalize his behavior by casting the others as the sole provocateurs. He has his chance to save her from this abuse, but doesn’t.

The car pivots and returns again. Now she is riding at a full gallop. Holding fast to the bridle, she leans forward against her stallion’s shoulders in unison with each stride. Her hair trails like a jet stream.  Her blend of strength and beauty lift her above the shameful harassment.

When their eyes meet for the final time he feels sick with shame. She looks hurt, betrayed. But, as the car pulls away, through the back window he sees that her fear has given way to determination. It’s the same look one sees in the eyes of today’s women protesters.

Fifty years later the encounter is still a painful memory for the boy. It taught him that men, or boys, who fail to stand up against the denigration of women are as much at fault as the perpetrators.

I know. The boy who failed was me.