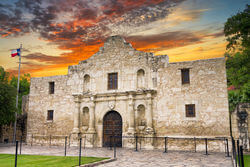 Skyscrapers dwarf the tiny mission in downtown San Antonio. Not the legend, however. Guests whisper as the doors of the Alamo swing open. This is hallowed ground.

A dozen tourists roam the compound. Here a hand full of Texas settlers defended the Alamo against 6000 Mexican regulars. No defenders survived.

Among the dead was Colonial William Travis. Young and brash, he inherited full command when Jim Bowie fell ill. There was no love lost between them. Davy Crocket, amid fiddling and spinning yarns about his days as a Tennessee Congressman, mediated. While their methods differed, their goals didn’t – Texas independence.

Brass placards describe the battle and list the names of the fallen Texans. For two weeks they traded cannon fire. Outnumbered 30 to 1, Travis held out hope for reinforcements. Santa Anna brought up reserves. The end came at dawn in a maelstrom of blades and blood as the Mexicans charged from all sides.

Travis, turned out in a waist coat with sword in hand, crouched atop a rampart directing defenses. A single shot to the head ended his command, one of the first to die. Soon the fighting was hand to hand. In an hour it was over.

I linger in a vestibule near the front gate. Bowie died here from a bayonet charge, too weak to leave his cot.

“He took four of them with him,” whispers an old man from the shadows. Wearing a vintage military jacket, his name tag identifies “Bill” as a docent for the Daughters of the Texas Revolution, caretakers of the Alamo.

“Probably the Bowie knife,” I offer.

“Pistols, too,” Bill responds. “He was a tough son of a gun. Dug for gold, traded land, and parleyed with Indians, any of which could get you killed. A lot more than a knife fighter.”

We enter a courtyard near the place Travis fell. Bill’s eyes narrow and his jaw sets. Leaves fall to the ground from atop the walls, like the early Texans before them.

“Every man had a story. They were just like me,” Bill whispers, “Come to Texas for a fresh start.”

As we walk through the interior rooms, he knows stories about everyone. There was the Spaniard, Anthony Wolf, among the last to die. Shot dead with his young son as they leapt from the chapel wall.  And Ben, Travis’ slave, the only man spared by Santa Anna along with widows and children.

The old man looks beyond the walls, plumbing the depths of his memory. “And then there was Travis. A school teacher, turned lawyer, turned commander of the Alamo. They say he was arrogant, head strong. But, leaders need a little of each, wouldn’t you say?”

He recounts how the first Texans were of two minds about Mexico. “A lot of folks were ready to make a go of it as Mexican citizens. In fact, one reason for the revolution was Santa Anna’s rejection of the Mexican Constitution of 1824. Most Texans supported it.”

“Didn’t they know that Mexican citizenship wasn’t the answer?” I ask.

“That’s 20-20 hindsight,” he responds. “In those days, when things didn’t work out people picked up and moved on. A fresh start was just over the hill. What flag they saluted didn’t matter much. A piece of land and a clean slate did. Sound familiar? Immigration’s always been an issue in these parts. Only back then “el zapato fue en el otro pie.”

We walk on in silence. I’m reminded that men don’t change, only times. There’s something uniquely American about starting over. For FDR it was the New Deal. For JFK the New Frontier. For Travis, Texas.

“I guess Santa Anna just over played his hand,” I suggest.

“Yup,” Bill says gesturing to the list on the wall. “And these boys figured they’d rather fight him here than in the settlements back east.”

It dawns on me how similar our problems are to the original Texans’. Fight the enemy on the frontier or at home. War or diplomacy. Just like CNN.

“Bill,” I ask, “Why did these people make a stand when the price was certain death? Was it honor, glory?”

“Well,” he says stopping to look me in the eye, “Everything has a price, doesn’t it? A life of compromise, no matter how long, is no bargain. Young fellows don’t always see that. You’ll understand one day.”

“I’d like to talk to one of them for just a few minutes.”

“Well, you never know, do you?” he chuckles. “I’ve enjoyed our chat, son. Good luck and never give up the fight.”  When I look back he’s gone.

I comment to a lady at the desk, “I enjoyed speaking to Bill. How long’s he been a docent?”

“I don’t think we have a Bill. Let me look under William.”

Then I spot Bill across the mall. He snaps a salute. I respond in kind.

As he fades into the crowd I realize he’s on only one list at the Alamo, and it’s not hers.