That admonition recently hit home with me in real life. At the end of my street in Pirates Beach West an old German Shepard, in good weather and bad, would guard the waterfront from his home on a high deck over the dunes. I used to greet him as I walked the path below to the water.

On a quiet Monday morning, I headed to the beach for a run. I took the trail beside his deck. He was not there.

The shoreline was deserted, but rife with sand castles, mermaids, and seashell hearts left behind by children on their last days of summer. By dusk their summertime mementos would melt away with the tide leaving only memories. But, for the young, there would always be next year.

I struggled to make any headway into the wind. Half-again as slow as last year, I realized my chances of competing again in another marathon were slipping away. I thought about the “Moneyball” quote. Was I being told? After all, running is but a children’s game.

After turning and retracing my steps, I closed in on the high deck over the dunes. I hoped to see once more the faithful canine sentinel silhouetted against the red sunrise. It was not to be.

Later that day I asked my companion what she knew about the dog. She said his name was Montana and that he had passed away several weeks before.

It made me sad because I figured his dog years roughly equated to my seven decades. Like two old geezers, we thought we could just go on playing the game forever. Old age does that to you.

In the end, the baseball adage from “Moneyball” was correct. Montana and I were just the latest to be told.

But there’s one thing for certain. I’ll keep slogging along until I get the final call. And, as for Montana, in our hearts he’ll always be watching over the beach … from the highest deck of all. 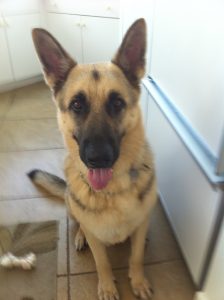